The Choir started in 1964 when Aberystwyth University graduates met up in Cardiff to form a choir. 55 years later Cardiff Polyphonic Choir now numbers some 65 singers. With a proud history and a continuing strong reputation, it has been directed since 2015 by David Young,

Over the years the choir has worked with many great orchestras – including the Philharmonia, the London Symphony Orchestra, the BBC National Orchestra of Wales, and the Hallé. It has sung for conductors like Sir Colin Davis, Sir Roger Norrington, Sir John Eliot Gardiner, and Eric Whitacre. And it has performed in all the top London musical venues. The choir performs internationally, touring the USA and many European countries. We sang the anthems before the France-Ireland match at Cardiff’s Principality Stadium during the 2015 Rugby World Cup, and for BBC Radio 4’s Sunday Worship to a live audience of 2 million.

A look back at the last three years shows the range and variety of the choir’s repertoire. 2017 included Beethoven’s Ninth Symphony with the Dresden Philharmonic Orchestra, conducted by Michael Sanderling in London’s Cadogan Hall and in Cardiff’s St David’s Hall. We also performed with Eric Whitacre and the Royal Philharmonic Orchestra in St David’s Hall. In Lichfield Cathedral, we joined Stafford Choral Society to sing Elgar’s Dream of Gerontius under David Young’s direction. And we visited Lund in Sweden, joining forces with Lund Chamber Choir. The year ended in great style in a packed St David’s Hall with an acclaimed performance of Handel’s Messiah, with baroque instrument ensemble Réjouissance and soloists Sarah Tynan, William Towers, Joshua Ellicott and Matthew Brook.

A major highlight of 2018 was a performance last November of Monteverdi’s Vespers of 1610 in Llandaff Cathedral, accompanied by leading instrumentalists including brass group His Majesty’s Sagbutts & Cornetts. We also performed Sir Karl Jenkins’ mass The Armed Man at the first night of the Welsh Proms in St David’s Hall, together with the Ardwyn Singers and Llandaff Choral Society. A concert of Lenten Motets then featured renaissance polyphony by Byrd, Thomas Tallis, and J S Bach. And, in a totally different musical style, we sang a programme of jazz favourites by 20th century greats like Gershwin, Cole Porter, and Duke Ellington.

Our 2019 programme began with the two beautiful Requiem masses by French composers Maurice Duruflé and Gabriel Fauré, performed in Penarth and in St Katharine Cree church in the City of London, as part of the Brandenburg Choral Festival of London. Our summer concert featured 8-part a cappella works including Rheinberger’s Mass in E flat, and works by Sir James MacMillan and Eric Whitacre. Then in October we were privileged to be part of a major Welsh-German project to bring Berlin’s Sinfonie Orchester Schöneberg to Wales. Performances of Mendelssohn’s Elijah in BBC Hoddinott Hall Cardiff, and in St Davids Cathedral, Pembrokeshire, were followed by a return visit to Berlin where we performed Elijah to a packed audience in the City’s internationally-renowned Philharmonie hall.

More information about the Choir’s history can be found HERE.

As a choir we pride ourselves on maintaining high musical standards, and, as such, entry to the choir is by audition. However, the social side of the choir is equally important and new members will always receive a warm and friendly welcome. If you are interested in trying us out, you’ll find everything you need to know HERE. 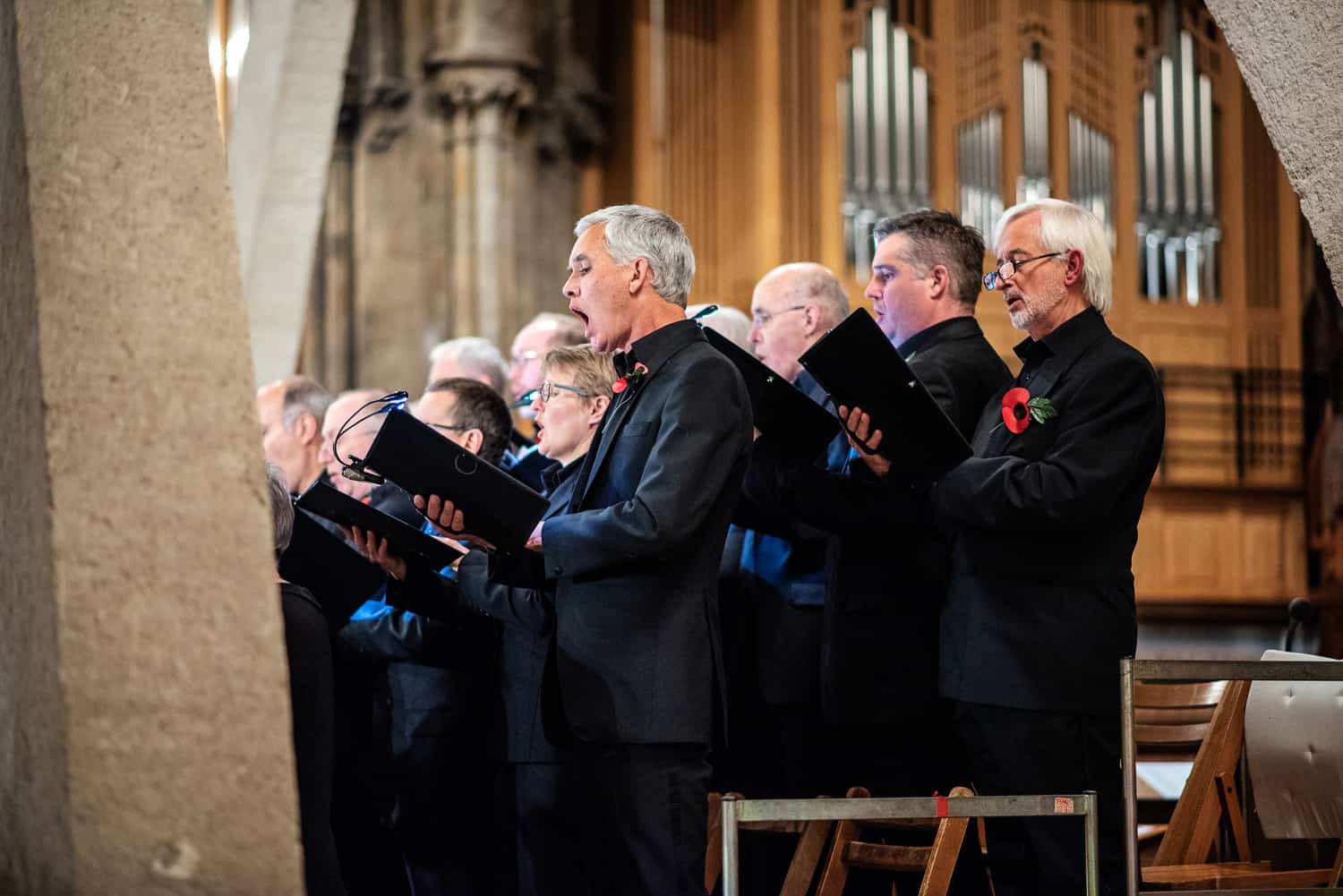